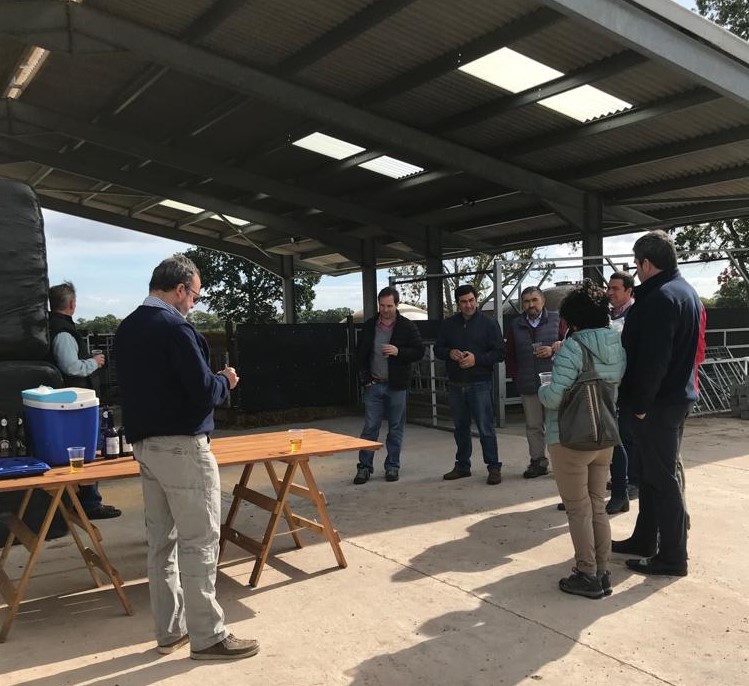 Following our C.E.O Matt Nightingales trip to Chile last year, where he advised on effective beef production from the dairy herd, September saw a delegation from Chile visit us at Meadow Quality.

Further to a visit undertaken by Matt Nightingale in October 2017, a delegation from Corpcarne (the meat corporation) of Chile visited Meadow Quality in September 2018. The purpose of the visit was particularly focused on calf rearing and the growing and finishing of Black & White steers.

The country of Chile has many natural advantages to beef production; FMD free since the 1980’s, they have been permanently BSE free, and are close to Brucellosis free status. They have great natural barriers to disease, being bordered on the length of their 2,500 mile coastline by the Pacific Ocean, and on the land border by the Andes mountains. This makes their meat very attractive for export to the lucrative Asian beef markets. However, they are also bordered by the huge beef producing neighbours of Brazil, Argentina and Paraguay, who can put meat on Chilean supermarket shelves, cheaper than it can be produced domestically.

Their desire to redress this balance of beef production in Chile has led the country to engage with and look at how Meadow Quality works with the UK dairy industry, to buy black & white bull calves and beef calves as an integral part of the UK’s beef supply chain. Currently the challenge in Chile is that most dairy cows are bred to black & white conventional semen, meaning a large population of male dairy bull calves, but limited numbers of beef x dairy calves to farm for their meat industry.

The delegation of 9 visitors, including large scale beef and dairy producers, industry representatives, education heads and researchers wanted to focus on; the use of MQL collection centres, the efficient rearing of baby calves and ultimately the efficient finishing of black & white steers and beef x dairy calves at Meadow Quality suppliers. The calf rearing units at Roy & Katy Turners near Coventry showed the group, how a very efficient black & white calf rearing unit can be established and run on a relatively small footprint, allowing up to 5 groups of calves to be fully reared annually. The rearing unit at The Manning family farm showed the group how both native and continental bred calves can be reared using an automated milking machine system, and close attention to detail on antibiotic usage, which will become a necessary focus for calf rearing units in the UK for the future. Rob and Hannah Collins new build unit near Worcester showed the group how an igloo system, again on a relatively small footprint can be built to specification and managed using all data points available to constantly challenge and improve each batch of calves in rear. The group were really impressed with all the units, and it gave them confidence that they too could use the same skills in Chile.

The finishing units of The Frost family and Berryfields Farms limited showed how a fit reared calf weighing an average 130kg at the point of delivery can achieve a 600kg finish in a 365-day timeline on the finishing unit, if the groups are well managed and particularly well fed on the Berrystock home feed ration produced at Berryfields Farms Limited, something no one in Chile is as yet achieving.

The beef finishing unit at Warwickshire College also showed the group how measuring feed intakes, and regularly weighing cattle is vital to creating Feed Conversion Efficiency data, which is such an integral part of future intensive beef production. The group were also showed how DNA tests were taken on each animal to also measure the effects of Genetics in the herd of 300 heifers and steers, again something that the group had not experienced before.

Along with a visit to Dairy Day at Telford and a visit to the Dovecote Park abattoir facility ensured the delegation had a good overview of the Meadow Quality business, and the UK beef industry. The feedback from the group was very positive, and they are now looking at how they engage with Meadow Quality on a more formal consultation basis, and potentially look at a training programme for young Chilean farmers in the UK.